As a visual artist, my intention has been to create portals of light to shift our consciousness into the realms of light. My artwork is intended to inspire, uplift, and cultivate connection with the divinity within ourselves and all life.

While I have not painted nor created video much in recent years, this page offers a few windows into past creations, including the complete video of Atnas (see below.)

This video was made a long time ago, and it does not necessarily reflect what I would create now.  (It is a bit cheesy, I admit!) But, we had fun making it, and the music is my favorite part (along with the incredible actors!!)

A new heroine is here to revamp the habits of the x-mess-stress holiday. Whoosh!!! “Release” is the buzzword of her business. Her mission involves flying around the world on a vacuum cleaner and helping get rid of the gunk we wish to see go.
To some, Atnas may appear as a cleaning lady, humbly hauling away your trash. To others, she can be a life coach, walking you through the deep process of releasing unhelpful habits and beliefs. Or she may tote her whole toolbox down the chimney to bring in the vast sweep of change. It is all up to you, and what you ask for. Arriving at such a role, and standing firm in the realm of service is a journey that Atnas continues to navigate. The video leads us through Atnas’ life via experimental animation and filming techniques.  Writer and director Kelsey LaPoint (Ilarion) and artist and actor  Lyndsey Scott (Atnas) team up with filmmaker and choreographer Rebecca Rivas to bring you a video that will shebang-bop and uplift your holiday spirit!

Thanks to the New Music Circle for funding.

Created in 2009 in St. Louis with the help of many many wonderful folks.  Mostly written, filmed, and edited within 3 weeks, with additional editing in 2011. All on a minimal budget.  Thank you for everyone's help!

The origins of Atnas were in 2005, when I considered an alternative myth for the holiday-day time~ in order to balance the consumerist focus that overwhelms our culture.  I wrote and illustrated the poem "Rad-ickle X-mess" in that year and published it in the Confluence in St. Louis.  In 2008, I was funded by the New Music Circle for a performance, and Atnas was a main character in "May these Changes Make Us Light."  The following year, she further develops as "Atnas Akinah: The Adventures of Santa's Daughter" is filmed.  In some ways, her character mirrors my own evolution:  from an external focus of action, to an internal focus of healing, and then a more integrated focus of balanced action and wholeness . . .

And, a huge thanks to Lyndsey Scott.  Our friendship highly influenced the development of who "Atnas" became and is now.  Truly Atnas would not exist without her!  Her own musical compositions, acting, ideas, and her embodiment of spunk and authenticity brought Atnas to life.  In some ways, I consider the character of Atnas to be a combination of Lyndsey and myself, and yet, she is something beyond the sum of her parts . . . she is her own life, her own character~ doing what neither of us could do on our own! 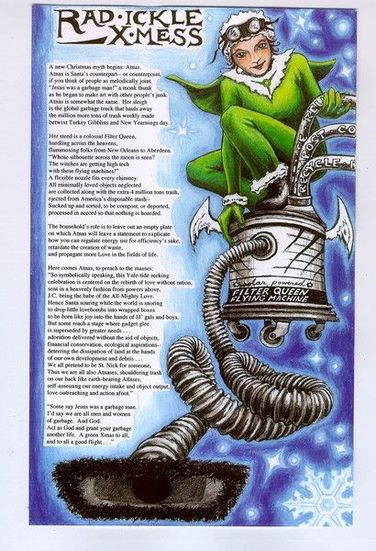 A new Christmas myth begins: Atnas. Atnas is Santa’s counterpart—or counterpoint, if you think of people as melodically joint. “Jesus was a garbage man!” a monk thunk as he began to make art with other people’s junk. Atnas is somewhat the same. Her sleigh is the global garbage truck that hauls away the million more tons of trash weekly made betwixt Turkey Gibblins and New Yearnings day.

Her steed is a colossal Filter Queen, hurdling across the heavens, flummoxing folks from New Orleans to Aberdeen. “Whose silhouette across the moon is seen? The witches are getting high tech with these flying machines!” A flexible nozzle fits every chimney. All minimally loved objects neglected are collected along with the extra 4 million tons trash, Ejected from America’s disposable stash— sucked up and sorted, to be compost, or deported, processed in accord so that nothing is hoarded.

The household’s role is to leave out an empty plate on which Atnas will leave a statement to explicate how you can regulate energy use for efficiency’s sake, retardate the creation of waste, and propagate more Love in the fields of life.

Here comes Atnas, to preach to the masses: “So symbolically speaking, this Yule-tide seeking celebration is centered on the rebirth of love without ration, sent in a heavenly fashion from powers above, J.C. being the babe of the All-Mighty Love. Hence Santa soaring while the world is snoring to drop little lovebombs into wrapped boxes to be born like joy into the hands of lil’ gals and boys. But some reach a stage where gadget glee is superseded by greater needs . . . . adoration delivered without the aid of objects, financial conservation, ecological aspirations— deterring the dissipation of land at the hands of our own development and debris . . . . We all pretend to be St. Nick for someone, Thus we are all also Atnases, shouldering trash on our back like earth-bearing Atlases, self-assessing our energy intake and object output, love outreaching and action afoot.”

“Some say Jesus was a garbage man. I’d say we are all men and women Of garbage. And God. Act as God and grant your garbage another life. A green Xmas to all, and to all a good flight . . . ” 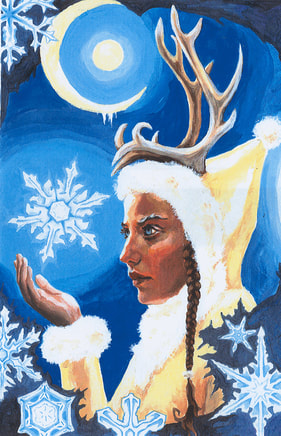 May These Changes Make Us Light
multi-media performance at the New City School Theater
a collaboration of many, written and directed by Kelsey LaPoint
December 2009

An adventurer seeks the counsel of Santa Claus on a quest to meet the most inspiring entities of Earth. On his journey to the North, he encounters other unexpected and yet extraordinary individuals:  Atnas, the environmental activist; the Snowqueen, guardian of the North; Mrs. Claus; and many creatures and elves.

Experience a radical adventure and remaking of the Christmas myth!

Image of the Snowqueen~ the flier for our show~ painted by Kelsey
Images from the show and the film within the show below  . . .
PAINTINGS and other art 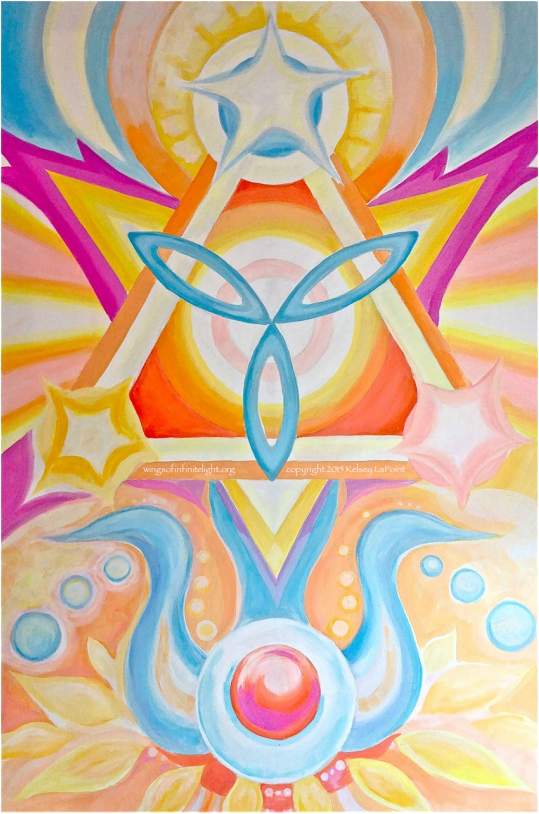 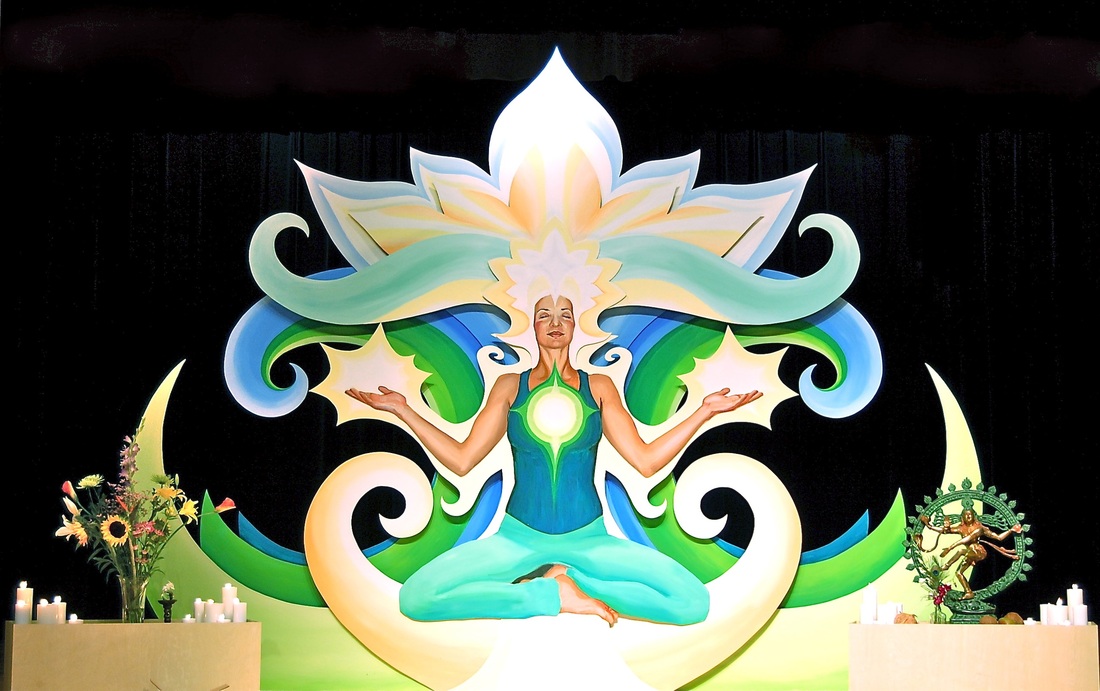 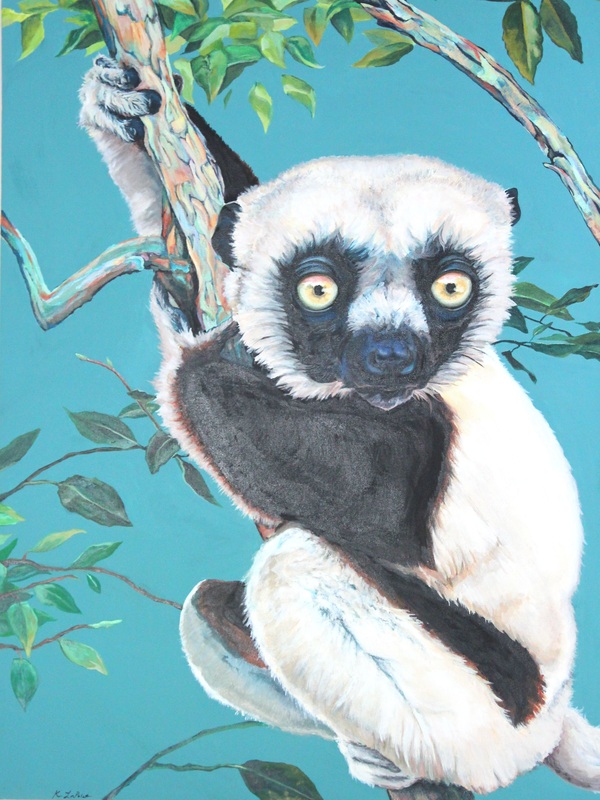 Sifaka for my sister, who spent a lot of time in Madagascar!  painted in 2008 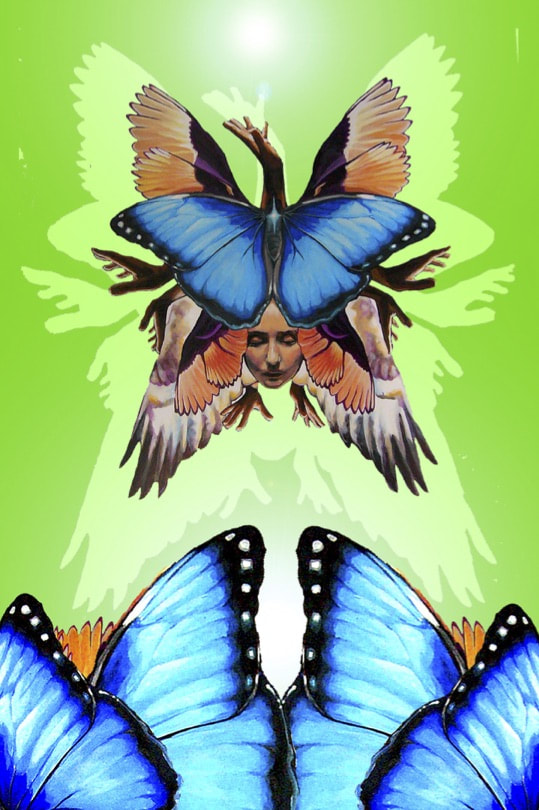 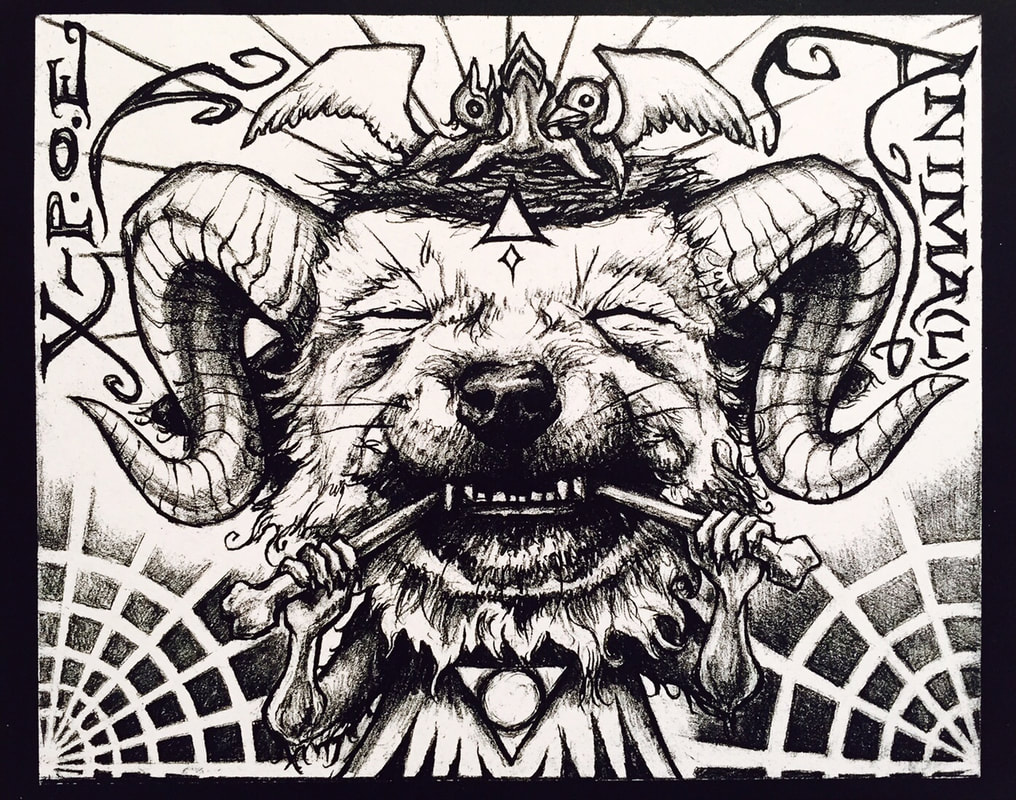 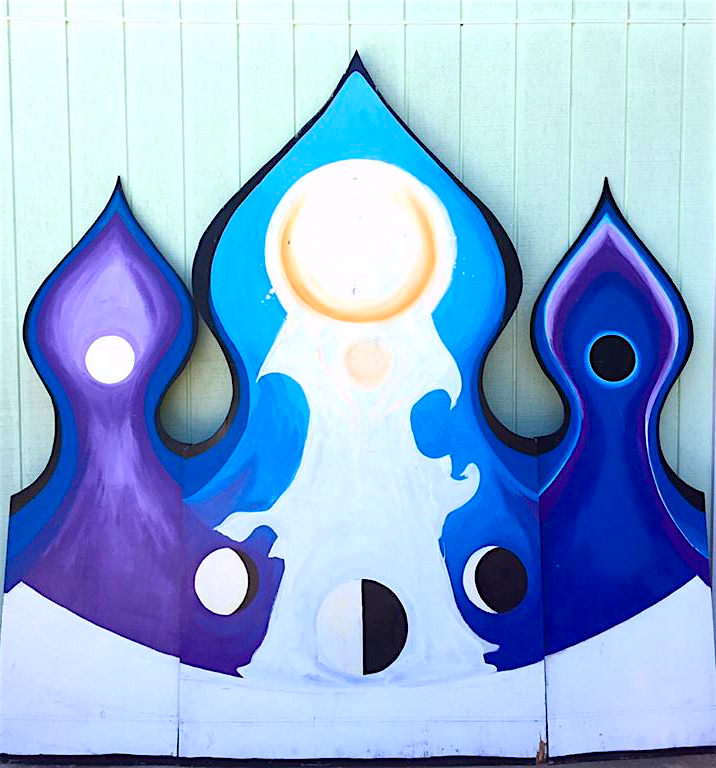 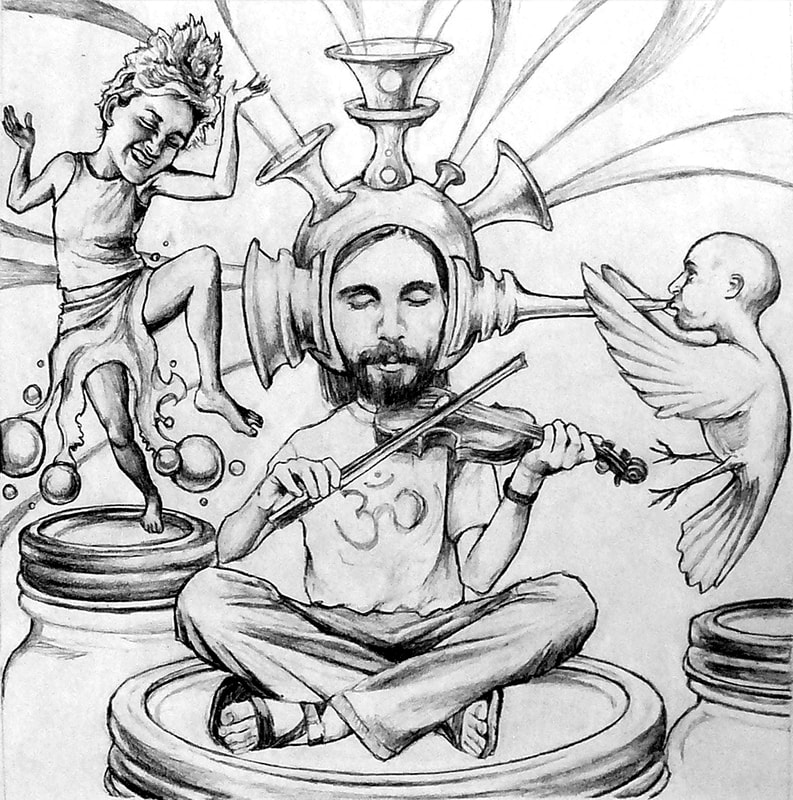